This post may contain affiliate links. Please read my disclosure for details at the bottom of this page. As an Amazon Associate, I earn from qualifying purchases on this post about how people celebrate Lunar New Year in South Korea. We hope you enjoy learning about Korean Lunar New Year!

Happy New Year everyone! Around the world, people are celebrating the end of one year and the beginning of another. But, have you ever heard of Lunar New Year? In some cultures, people not only celebrate New Year on December 31st of every year but also New Year following the lunar calendar. South Korea is one of those countries!

In South Korea, the important New Year holiday is known as ‘Seollal’ (설날).

What Is Lunar New Year (Seollal)?

Lunar New Year, known as ‘Seollal’ (설랄) in the Korean language, is a national holiday and festival celebrating the first day of the Korean calendar. The traditional Korean calendar originated from the lunisolar calendar which marks the dates of both the moon phase as well as the time of the solar year.

People believe that Lunar New Year (celebrated in many cultures) originated in the 3rd century–though many Chinese writings reference this holiday, the first known reference is believed to come from the historical work, Records of the Three Kingdoms, Book of Wei, Volume 30.

The earliest record of Korean New Year celebrations is included in the Chinese texts the Book of Sui and the Old Book of Tang. These books reference celebrations during new year’s day in the Sella Kingdom, one of the Three Kingdoms of Korea, in the 7th century.

The first known Korean record of the new year celebration can be found in Samguk Yusa, known as the Memorabilia of the Three Kingdoms. This book is a collection of legends, folktales, and historical accounts stemming from the Three Kingdoms of Korea (Silla, Goguryeo, and Baekje). The original text was written in Classical Chinese, which was used by literate Koreans before the creation of the Korean written alphabet known as hangul.

How Do People Celebrate Lunar New Year in Korea?

Below, we list some traditional ways people celebrate Korean New Year. In Korea, Because of the importance of this holiday, there are many rituals and traditions associated with the date.

In Korea, ‘sebae’ (세배) is one of the most important familial traditions. The word refers to the act of deeply bowing to your elders. You do so by kneeling on the ground, leaning fully down until your head and hands rest on the floor.

The younger generations bow to their elders as a sign of respect when wishing them a happy new year. During this familial ceremony, people dress in traditional garb known as ‘hanbok’ (한복).

The traditional words spoken to elders during sebae is ‘saehae bok mani badeuseyo’ (새해 복 많이 받으세요) which translates to ‘please have lots of luck in the new year.’

Typically, elders return the respectful gesture by giving gifts or money to those who give bows to them.

In Korean ‘charye’ (차례) refers to traditional ancestral memorial ceremonies, otherwise known as ancestral rites. At this time, people set up traditional foods on a table as a gift to their ancestors behind their family’s ancestral tablets. When performing these rites, people also deeply bow to the table as a way to respect their family who came before them.

While ancestral rites are popular among Koreans, it is not universal in the culture. Many people chose not to do this as it is related to particular religions such as Buddhism.

What Should You Do in Korea During Seollal?

In all honesty, for those traveling to South Korea, I recommend avoiding a trip during the traditional Korean New Year. During this time, almost everything shuts down for the national holiday, including businesses, museums, and tourist destinations.

At this time, travel becomes incredibly difficult throughout Korea as people head home for the holidays. Buses, trains, and roadways will be packed with native Koreans heading to their hometowns to spend time with their families.

While I loved experiencing the Korean New Year when I lived in South Korea, I know it isn’t the best time to tour the country.

When Is Korean New Year?

Like I stated above, this lunar holiday shifts each year. Below, we list some past dates as well as some future dates:

We Hope You Enjoyed Learning About Korean New Year!

In the end, we hope you enjoyed learning about Lunar New Year in South Korea. If you ever get the chance, I hope you can visit South Korea during the winter!

If you would like to read more about Korean and Southern culture as well as recipes, check out further articles on our blog. We listed some of our favorite Carving A Journey recipes below! For reference, many recipes are influenced by our blended Korean and Southern heritage. 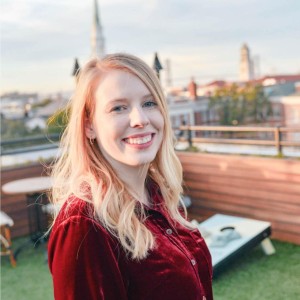